The most awaited launch in the earbud category during the Amazon prime day on the 6th August this year, exclusively for prime members, is the boat’s airdopes 441 pro earbuds.

These latest boat earbuds are an updated version of the previously launched boats airdopes 441 earbuds.

In this post we will do boat airdopes 441 pro tws earbud full review with all details. We willÂ  give a practical performance review of this boat 441 pro truly wireless earphone.

Today we will find out whether these earbuds are really worth their price or not.

We will also test out the features thoroughly and find out if they are actually working as advertised. So read this Boat airdopes 441 pro review.

“Add Dopeness To Your Style” is the slogan that is written on the boat airdopes 441 pro twin wireless earbud box.

Let us start with what comes within the box

The boat airdopes 441 Pro earbuds come with a 6mm dynamic audio drivers which are reasonably loud.

The bass is powerful and profound. It is neither too much and not too little and hence has a pleasant touch to the sound.

The treble, the highs, the mids and the lows all are quite crisp and clean.Â

Sometimes there is no issue while listening to this box airdopes 441 pro earbuds at full volume.

However, at times the bass is too dominating and very loud at higher volumes making the vocals quite unclear.

These earbuds provide a pleasant and balanced sound at 80% volume. It is not recommended to listen to these earbuds at a higher volume.

Call quality is not that great. The voice is pretty clear, and you can hear the other person well too during calls.

However, the problem starts when there is too much noise around you like when you are in a traffic jam or a crowd.

Your voice will be clear, but the background noise will be quite significant, and hence one can understand your voice, but only if they concentrate well enough. Noise cancellation isn’t very powerful in such situations. The boat 441 Pro earbuds are incredibly lightweight and made up of good quality plastic.

They have a microphone on one side for taking calls and touch controls to control the earbud.

The color is a combination of bright neon and black, which is sure to attract everyone’s attention.

These earbuds are also equipped with extra wing-like structures made of silicon that are flexible and can adjust around the ears providing additional support to the earbuds.

The wings can also be removed if one doesn’t like it.

The fit is precise and exact, and the airdopes 441 pro earbuds will never fall off during intense workout sessions or jogging.

The earbuds didn’t fall even while shaking the head actively.

The charging case is quite bulky, which was kind of expected because of the huge battery capacity.

However, the company has tried it’s best to keep it as compact as possible.

It fits within your pocket with ease without feeling very heavy or uncomfortable.

The charging case of boat airdopes 441 pro earbuds is made of plastic and has a matte finish to it.

Even though it is made of plastic, it doesn’t feel cheap at all.

There are four LED indicators present on the charging case. Below these led indicators is a button.

On pressing the button, the indicators will light up.

The number of lights glowing will indicate the battery percentage of the charging case currently remaining.

There is also a chamber that consists of two slots. One is the ordinary slot for charging the case of boat airdopes 441 pro earbuds.

Another is a USB slot which can be used to charge your phone or any other device through a USB cable during an emergency.

This is the most exciting and useful feature of the boat airdopes 441 pro earbuds.

The charging case can function as a power bank and can be used to charge your phone at times.

However, it can only be used in case of certain situations and not always a power bank.

The magnetic lock holding the boat airdopes 441 pro earbuds to the charging case is also quite secure and doesn’t fall off even when shaken vigorously.

Protection Against Water, and Sweat(IPX Rating)

The boats airdopes 441 pro earbuds have an IPX rating of 7, which indicates that it is extremely resistant to water splashes and protected against dust and sweat.

This is the perfect earbud to carry to the gym or during the monsoon season.

You don’t have to worry about damaging the boats airdopes 441 Pro earbuds when it starts raining suddenly or when you get sweaty ears during gyming.

It can play or pause the ongoing song with the single tap on any of the earbuds.

Doing the same will also accept an incoming call and hang up on the current call.

To reject a call, you have to press long for a few seconds.

To Trigger voice assistant, you have to press and hold for 2 seconds. 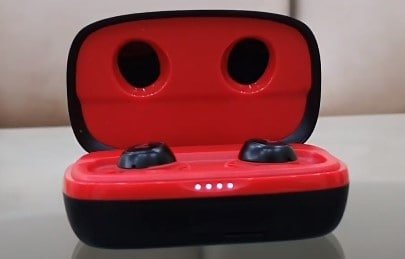 The boat airdopes 441 pro earbuds are equipped with the latest version of Bluetooth version 5.0, which ensures a stable and reliable connection between your smart devices and earbuds.

There are lower chances of facing disconnections in signal in the middle of listening to a song or watching a movie.

For pairing the boat airdopes 441 Pro earphones with your smart devices for the first time, you will have to take them out of the battery case.

The audio-video sync is quite precise, and there was negligible latency during gaming.

There was a delay of just 250 milliseconds, which may be irrelevant for casual gamers but is quite vital for dedicated players.Â

There is also an excellent 3D sound effect where you can realize from which direction the noise is coming and is particularly useful in playing games like PUBG where you need to know from which area the gunshot was coming from.

Also Read:Â Boat Airdopes 441 Vs 381 Comparison: Which one should you Pick? Boat airdopes 441 pro review of its battery life is as follows:

Â The boat 441 pro earbuds claim to have a battery life of 4- 4.5 hours off audio playback time. The earbuds were found to last for 4 hours at 70% volume.

The earbuds themselves have a battery capacity of 35 mAh in each of the buds and the capacity of the charging case is a huge 2600 mAh.

The charging case can charge the earbuds 30 times which increases the playback time tremendously to 150 hours.

Actually, it was found to be somewhere around 100 to 120 hours which is also pretty decent considering the price range

The sound quality of boats airdopes 441 Pro earbuds is excellent.

Battery Life Up To 4 Hours of Earbuds.

You can also use the charging case as a power bank and charge your phone in an emergency.

Best for Gym and Workout. Because fit is exceptionally perfect

It has touch controls and not button controls

It has an IPX7 rating

The call quality isn't excellent in crowded places, and you do get background noises.

You cannot control the volume of the track from the touch sensors present in earbuds.

There is a minimal latency during gaming

The boats airdopes 441 Pro earbuds rarely has any cons.Â  If you are a bass lover then you will very happy with these earbuds.

Moreover, the charging case of the boat airdopes 441 Pro earbuds can also double up as a power bank and charge other devices on the go.

The fit is perfect, and the IPX rating of 7 makes it extremely suitable for going to the gym and morning walks.However, only if your priority is call quality or if you are a professional gamer where even the smallest latency can affect you, then you should look for other options.

Keeping that aside, this is a pretty flawless piece of gadget at this price and a must by according to me.